Four phases in the life cycle of hotel furnishings

The greater Las Vegas area is home to 160,252 hotel rooms, with beds, dressers and other furnishings designed to make visitors comfortable.

Much like a nature documentary on migration, the story of much of the hotel furniture begins in a distant land, continues in the Southern Nevada desert and ends where the furnishings find a quiet place to retire.

Here’s a brief look at the life cycle of resort furniture in Las Vegas. 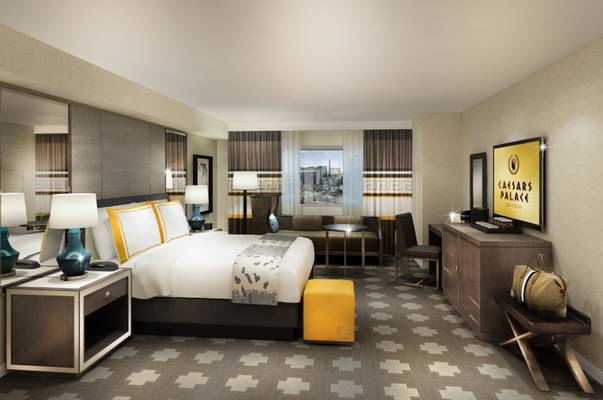 Caesars Palace
A Rendering by KNA Design of a king guest room in the renovated Julius Tower at Caesars Palace in Las Vegas.

They collaborate in a process outlined by Ron Frye, vice president of design and construction for Boyd Gaming:

Working with the resort company, the interior designer conceptualizes the room — often on presentation boards or illustrations — and proposing finishes for the walls, floor coverings and furnishings.

They sometimes design the furniture themselves but more frequently base their concepts on samples and catalogs provided by furniture manufacturers.

Then, the furniture is often customized to fit the layout of the rooms and provide the amenities customers want, such as USB ports, safes and mini-refrigerators.

In some cases, Boyd builds life-size mock-ups of the rooms to better evaluate the concept.

There are two general categories of hotel furniture — casegoods (dressers, tables, sideboards and armoires) and upholstered goods (chairs and couches).

After a design is set, Boyd works with buying consultants who broker deals with manufacturers.

“We may buy chairs from Europe and have them finished in the U.S. or have a company that builds them all in the U.S.,” Frye said. “Sometimes we go to Mexico to have the (upholstered) furniture made, and we often go to China or an emerging market to have casegoods made.”

It’s not all about price, Frye said. Overseas manufacturers can be cheaper, but there’s a greater risk of damage because the furniture is traveling so far.

Hotels will order enough furniture for the remodeled rooms, plus extras, called “attic stock,” which is stored in unfinished rooms in the hotel or in local warehouses.

Having extra stock allows hotels to change out damaged furniture quickly with new pieces before making repairs. Some hotels do repairs in-house; others hire contractors.

When remodeling a hotel tower, Frye said, Boyd likes to work on two floors at a time, doing the demolition and prep work on one, while prepping the other floor so it can be returned to service.

“We generally turn an entire floor in two or three weeks,” he said. “Usually, it’s a staggered week. We’ll take one floor out on a Sunday and have it turned back the following Friday so they can sell it for the weekend. It’s often just short of two weeks.” 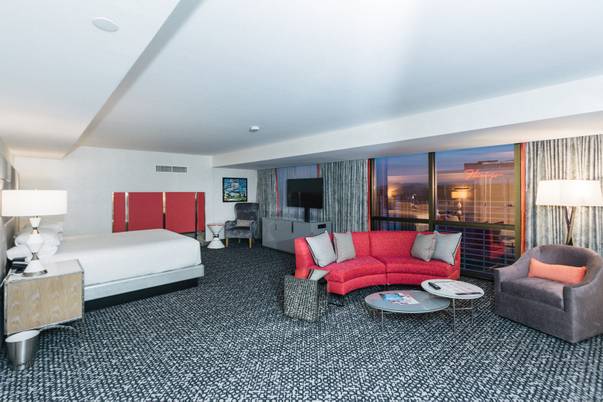 Wade Vandervort
A Look inside the newly remodeled rooms at the flamingo Hotel and Casino, Monday, Nov. 13, 2017.

Companies have no set schedule when rooms are remodeled. It can depend on several factors.

David Lee owns Hotel Liquidation Logistics, a company that removes old furniture from hotels before reselling it to other hotel chains and the public.

Before the Great Recession, remodels were done about every five years. After, the paced slowed. “Now that things are brighter, there’s a lot of (remodels) again,” Lee said.

According to Frye, Lee, and Evette Aviles, owner of Liquidators LV, this is how old hotel furniture is retired:

A general contractor is hired to do the remodel. That company hires someone such as Lee or Aviles to remove the furniture. In the past, Frye said, hotel companies tried to sell it themselves, but they realized there wasn’t enough profit to justify the effort.

More often, hotels are remodeled in response to changing consumer taste. “Think of the MGM,” Frye said. “The MGM used to have a Dorothy and ‘Wizard of Oz’ theme. Today, in 2018, that wouldn’t play well.”

Usually, Lee and Aviles aren’t paid to remove the furniture, and instead make money from reselling it.

Profit depends on the quality and condition of the pieces. Lee and Aviles are usually called in after the last customers check out and will have just a few hours to remove an entire floor of furniture. Sometimes they’ll move it from the rooms to the loading dock themselves; other times, hotel employees bring it to the dock. 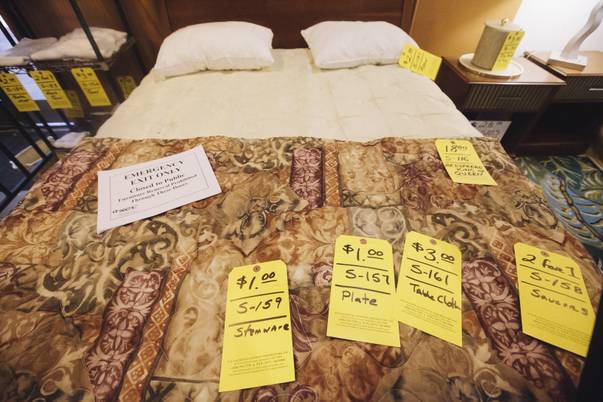 Mikayla Whitmore
Bedspread, pillows, and sheets are available for purchase at a liquidation sale in the Clarion on Wednesday, Sept. 10, 2014, in Las Vega.

Both Lee and Aviles remove the furniture and try to resell it to the public or to other hotels and motels.

The majority of businesses looking for deals on used hotel furniture are mom-and-pop places from out of town, but there have been some notable exceptions. Several years ago, the Plaza bought high-end furniture from the Fontainebleau after it went bankrupt.

The most salable pieces of furniture are matching sets from rooms and small dressers because they fit the rooms in smaller hotels and motels. “Regular dressers are gold in this business,” Aviles said.

The least desirable pieces are large armoires from older hotels. Most are too large to fit rooms in smaller hotel rooms or homes.

Custom heavy pieces, such as oversize headboards, are also problematic. But again, there are exceptions.

“For the Palms, we did all their attic stock, and they had a lot they were taking out of the Playboy Club. It was club furniture and really different, but surprisingly, that stuff went really quick,” Lee said. He sold it to owners of a local vacation home.

If the furniture is unpopular or in poor condition, Aviles and Lee donate it to charities.

“Taking it to the dump is expensive,” Aviles said. “You try to give it away before you throw it away.”

For domestic orders, Lee and Aviles arrange the shipping and include the costs.

For international orders, both will get a bid from an international shipper and then hand it off to the buyer. The shipping company then drops a container off at their locations, and they’ll load it up before the shipper takes the container away.

Depending on its destination, packing the furniture can be a chore.

“Going to Mexico is tricky,” Aviles said. “Every piece has to be inventoried. It’s trickier the farther south it’s going.”

Aviles has had people ship her furniture throughout the world, including Mexico, Belize, South Africa and the Ukraine.

“We get calls from everywhere,” Aviles said. “I had a call from Kentucky last week and from California. There’s a lot that goes to Northern California and to Florida as well. We have shipped to Belize and in containers to Russia.”